Martin Luther: The Problem with Faith and Reason: A Reexamination in Light of the Epistemological and Christological Issues 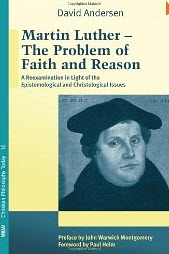 Luther’s critics have consistently charged him as an irrationalist and pessimist concerning reason’s capabilities, and even by his followers as a fideist who sees little or no relationship between faith and reason.

In this book, David Andersen offers a fresh and timely re-evaluation of Luther and his understanding of the relationship between faith and reason based upon a thorough engagement with Luther’s mature writings. Dr. Andersen persuasively argues that, far from being either an irrationalist or a fideist, Luther stands within an empiricist tradition and that his pronouncements on fallen human reason can be understood only from that philosophical perspective. Based upon recent research into the writings of William of Ockham, who positively influenced Luther in this area, Dr. Andersen also shows that Luther can no longer be charged as a pessimist concerning human knowledge.

Reason has an important role to plat for Luther in bringing one to faith, and the objectivity of Christ’s resurrection serves as the focal point that validates all Christian discourse. In subordinating itself to the facts of the death and resurrection of Christ for the forgiveness of sins, reason’s created function is restored to some extent as it receives that forgiveness in the words of Holy Scripture and the visible means of Baptism and the Lord’s Supper.

Additional music: Bo Diddley “You Can’t Judge a Book by its Cover”