Handbook of Consolations: For the Fears and Trials That Oppress Us in the Stuggle with Death 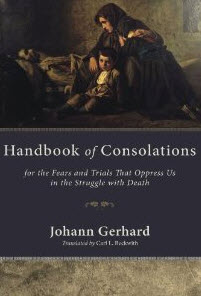 Johann Gerhard (1582-1637) was one of the leading dogmatic theologians of his time and was the authoritative voice of seventeenth-century Lutheran Orthodoxy. Yet, he also published numerous devotional works and meditations that were meant to be used in the daily lives of ordinary believers. The Handbook of Consolations sought to provide comfort and encouragement not only to those approaching death, but also to those who provided care for the sick and dying. Gerhard himself was no stranger to sickness and death, having lost his infant son and young wife, and faced numerous life-threatening illnesses throughout his life.

In this pastoral work, which is the first complete English translation based on Gerhard’s original Latin to be published since the seventeenth century, Gerhard brings together his extensive understanding of Scripture, theology, and church history in a practical and easy-to-understand manual that is as relevant and meaningful in the twenty-first century as it was in Gerhard’s day.