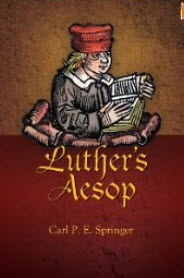 Reformer of the church, biblical theologian, and German translator of the Bible Martin Luther had the highest respect for stories attributed to the ancient Greek author Aesop. He assigned them a status second only to the Bible and regarded them as wiser than ”the harmful opinions of all the philosophers.” Throughout his life, Luther told and retold Aesop’s fables and strongly supported their continued use in Lutheran schools.

In this volume, Carl Springer builds on the textual foundation other scholars have laid and provides the first book in English to seriously consider Luther’s fascination with Aesop’s fables. He looks at which fables Luther knew, how he understood and used them, and why he valued them. Springer provides a variety of cultural contexts to help scholars and general readers gain a deeper understanding of Luther’s appreciation of Aesop.