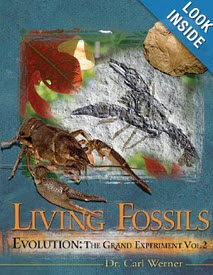 In 1938 the discovery of a large, unusual fish turned the scientific community on end. Dubbed a living fossil, the discovery of a coelacanth in South Africa shocked scientists around the world who thought this type of fish had died out millions of years prior during the process of evolution.

Living fossils are organisms found preserved in the fossil record, which still exist in similar form today. If the core concepts of the theory of evolution presuppose change over time, then how can these living fossils exist for millions of years remaining virtually unchanged?

Whether a shark, leaf, or crab, living fossils are a challenge for evolutionary theorists and create a fascinating debate among scholars. Do they indicate a younger earth than thought, placing the millions of years timeline of evolution in question? Or do they represent a deep mystery Evolution: The Grand Experiment, Vol 2 – Living Fossils delves into these provocative questions and more.

A fact-filled learning adventure as Dr. Werner takes you around the world on a unique scientific expedition from remote dig sites and museums to the Australian Rainforest and more.

How do living fossils impact one of the most controversial debates of our time – creation vs. evolution?