Predestination: The American Career of a Contentious Doctrine 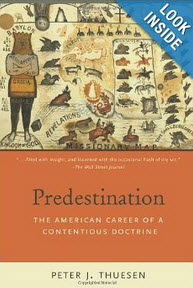 Winner of the Christianity Today 2010 Book Award for History/Biography, and praised in Christian Century as “witty…erudite…masterful,” this groundbreaking history, the first of its kind, shows that far from being only about the age-old riddle of divine sovereignty versus human free will, the debate over predestination is inseparable from other central Christian beliefs and practices–the efficacy of the sacraments, the existence of purgatory and hell, the extent of God’s providential involvement in human affairs–and has fueled theological conflicts across denominations for centuries. Peter Thuesen reexamines not only familiar predestinarians such as the New England Puritans and many later Baptists and Presbyterians, but also non-Calvinists such as Catholics and Lutherans, and shows how even contemporary megachurches preach a “purpose-driven” outlook that owes much to the doctrine of predestination.

For anyone wanting a fuller understanding of religion in America, Predestination offers both historical context on a doctrine that reaches back 1,600 years and a fresh perspective on today’s denominational landscape.

His Time - Katie Luther, the Opera