Root of All Evil?: A Pastor Stephen Grant Novel 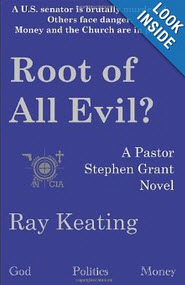 Do God, politics and money mix? In ROOT OF ALL EVIL? A PASTOR STEPHEN GRANT NOVEL by Ray Keating, the combination can turn out quite deadly. Keating introduced readers to Stephen Grant, a former CIA operative and current parish pastor, in the fun and highly praised WARRIOR MONK: A PASTOR STEPHEN GRANT NOVEL. Now, Grant is back in ROOT OF ALL EVIL? It’s a breathtaking thriller involving drug traffickers, politicians, the CIA and FBI, a shadowy foreign regime, the Church, and money. In this page-turner, plots are hatched, lives are lost, accusations are made, friends need and provide help, and relationships change. Money is used and pursued for both good and ill. Charity, envy and greed are on display. Throughout, action runs high. Find a unique character and story, and lose yourself in ROOT OF ALL EVIL? A PASTOR STEPHEN GRANT NOVEL. Keating said, “Since I wrote WARRIOR MONK, I’ve received surprising feedback from members of the clergy who once were in the intelligence community or know fellow pastors who did such work. It’s been fascinating. In ROOT OF ALL EVIL?, Pastor Grant, his family and friends, and some former co-workers have to deal with the consequences of how money, politics and religion mix, for better or for worse.”