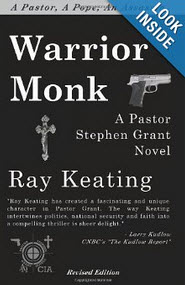 WARRIOR MONK: A PASTOR STEPHEN GRANT NOVEL made “The top 10 self-published books to cross WORLD’s desk this year.” WORLD magazine (June 29, 2013, issue) looked at more than 100 titles and then came up with a “final list of 10 that display clear writing and storytelling.” On WARRIOR MONK, WORLD declared, “The ‘warrior monk’ in question is an ex-CIA agent who settled into life as a … Lutheran pastor, saving lives and taking care of bad guys (who get saved).” WARRIOR MONK revolves around a former CIA assassin, Stephen Grant, who has lived a far different, relatively quiet life as a parish pastor in recent years. However, a shooting at his church, an historic papal proposal, and threats to the Pope’s life mean that Grant’s former and current lives collide. Grant must tap the varied skills learned as a government agent, a theologian and a pastor not only to protect the Pope, but also to feel his way through a minefield of personal challenges. Larry Kudlow, CNBC’s “The Kudlow Report,” said, “Ray Keating has created a fascinating and unique character in Pastor Grant. The way Keating intertwines politics, national security and faith into a compelling thriller is sheer delight.” U.S. Congressman Pete King, the Ranking Member on the House Homeland Security Committee, declared, “CIA intrigue, the Vatican, international terrorism and brutal assassinations make Warrior Monk a fast-moving, riveting read right out of today’s – and tomorrow’s – headlines. Add challenging religious issues, which the author makes us confront, and you have a brilliant novel. Ray Keating knows what he is writing about and writes it extraordinarily well.” And Paul L. Maier, best-selling author of A Skeleton in God’s Closet, commented, “Holy Scripture and unholy gun play in the same novel? Exactly – and you’ll love the combination! WARRIOR MONK offers a riveting mix of action, romance, and intrigue, served up by a master wordsmith. Keating’s Pastor Stephen Grant manages to wield both Bible and bullets with equal expertise. Grant is clearly in control whether in or out of the pulpit.”

Reformation Rush Hour - People of the Book Lutheran Outreach, "Triumph of the Absurd"