Home » BookTalk – Mission at Nuremberg: An American Army Chaplain and the Trial of the Nazis

Mission at Nuremberg: An American Army Chaplain and the Trial of the Nazis 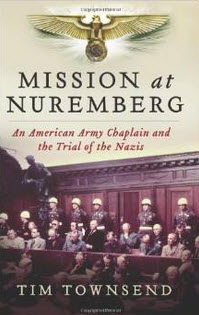 Mission at Nuremberg is Tim Townsend’s gripping story of the American Army chaplain sent to save the souls of the Nazis incarcerated at Nuremberg, a compelling and thought-provoking tale that raises questions of faith, guilt, morality, vengeance, forgiveness, salvation, and the essence of humanity.

Lutheran minister Henry Gerecke was fifty years old when he enlisted as am Army chaplain during World War II. As two of his three sons faced danger and death on the battlefield, Gerecke tended to the battered bodies and souls of wounded and dying GIs outside London. At the war’s end, when other soldiers were coming home, Gerecke was recruited for the most difficult engagement of his life: ministering to the twenty-one Nazis leaders awaiting trial at Nuremburg.

Based on scrupulous research and first-hand accounts, including interviews with still-living participants and featuring sixteen pages of black-and-white photos, Mission at Nuremberg takes us inside the Nuremburg Palace of Justice, into the cells of the accused and the courtroom where they faced their crimes. As the drama leading to the court’s final judgments unfolds, Tim Townsend brings to life the developing relationship between Gerecke and Hermann Georing, Albert Speer, Wilhelm Keitel, Joachim von Ribbentrop, and other imprisoned Nazis as they awaited trial.

Powerful and harrowing, Mission at Nuremberg offers a fresh look at one most horrifying times in human history, probing difficult spiritual and ethical issues that continue to hold meaning, forcing us to confront the ultimate moral question: Are some men so evil they are beyond redemption?

Faith'n'Family - Temptation in the Face of Suffering