Home » BookTalk – “The War on Humans”

The War on Humans 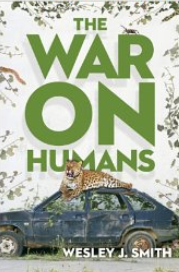 The environmental movement has helped produce significant improvements in the world around us–from cleaner air to the preservation of natural wonders such as Yellowstone. But in recent years, environmental activists have arisen who regard humans as Public Enemy #1. In this provocative e-book, Wesley J. Smith exposes efforts by radical activists to reduce the human population by up to 90% and to grant legal rights to animals, plants, and Mother Earth. Smith argues that the ultimate victims of this misanthropic crusade will be the poorest and most vulnerable among us, and he urges us to defend both human dignity and the natural environment before it is too late.

Faith'n'Family - Your Marriage by God's Design; Confessing Christ in a Contrary Culture