Home » BookTalk – Arab Winter Comes to America: The Truth About the War We’re In

Arab Winter Comes to America: The Truth About the War We’re In 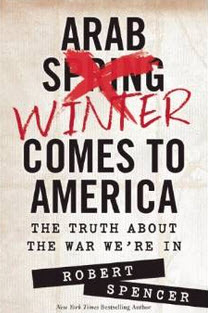 Overlooked by our media, purposely obscured by our own government, and unnoticed by the vast majority of Americans, the turmoil of the Islamic world’s “Arab Spring” has become an “Arab Winter,” bringing new threats of terror to America. New York Times bestselling author Robert Spencer, an expert on Islam and terrorism, reveals why America is shockingly unequipped to face this threat. In Arab Winter Comes to America: The Truth about the War We’re In, you’ll learn why the Obama administration has opted to appease rather than confront Islamic extremists in the United States; how Muslim organizations are pressuring witnesses to terror crimes not to cooperate with authorities; why the Justice Department has buried select news stories; and much, much more.The “Arab Spring” uncorked a jihadist genie in North Africa and the Middle East. It is about to wreak its mayhem here, with renewed terrorism. Americans need to inform themselves of the threat—and ensure that their elected government in Washington takes action. Robert Spencer’s Arab Winter Comes to America sounds the alarm and shows what needs to be done. It is essential reading.

Thy Strong Word - John 10 "I Am the Good Shepherd"