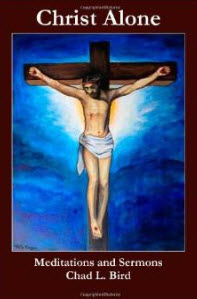 “For I determined to know nothing among you except Jesus Christ, and Him crucified.” St. Paul’s words to the Christians at Corinth are his words to the believers of every generation. Christ alone is the proclamation of the church. He is therefore the one who permeates every page of these meditations and sermons. In rich and colorful language that is steeped in the account of creation, the Passover, the worship life of Israel, and the Gospels, the author focuses the reader on the crucified and risen Jesus. The meditations and sermons in this book were written over the course of many years, and preached in a variety of contexts. The earliest of them, one that has come to be called “The Amy Sermon” (p. 193), was preached while Chad Bird was serving as a vicar at Bethlehem Lutheran Church, Lakewood, Colorado, in the mid 1990’s. A few of them were written for St. Paul Lutheran Church, Wellston, Oklahoma, where he served as pastor from 1997-2001. The majority of them were delivered from the pulpit of Kramer Chapel, on the campus of Concordia Theological Seminary, Fort Wayne, Indiana, where he served as Assistant Professor of Exegetical Theology from 2001-2006. Many of the selections were originally published in a collection entitled, Christ Crucified: Lutheran Sermons, which is now out-of-print. In addition to those sermons, there are many new meditations and homilies, all of which deliver the riches of the Gospel to sinners in need of the forgiveness, life, and salvation that is found in Christ alone.