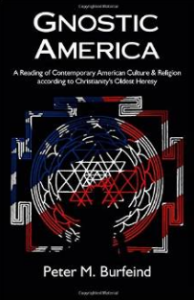 Gnostic America is a reading of current American culture, politics, and religious life according to the ancient movement known as Gnosticism. In it, Peter M Burfeind builds off the foundations of Hans Jonas, Denis de Rougement, Norman Cohn, William Voegelin, Carl Jung, and Harold Bloom, each of whom saw the effects of Gnosticism in contemporary American (and Western) life. He explores the spiritual mechanisms going on behind everything from transgenderism to so-called “contemporary worship,” from the deconstructionist movement to the role pop music and media have in our culture, from progressive politics to the Emergent Church. Particularly challenging is Burfeind’s claim that both progressivism and Neo-evangelicalism — seemingly at odds in the “culture wars” — actually share the same Gnostic roots. Burfeind’s book is a tour de force through contemporary rock, pop, movies, television, politics, and religion showing how many of the values driving these cultural elements are informed by the ancient esoteric teachings of Gnosticism. Burfeind marshals a ton of surprising evidence to make his case, taking us through ancient and Medieval history, through the Enlightenment and Romantic periods, to today. Those willing to grapple with the philosophical and spiritual positions of the fathers of contemporary American life will be rewarded. Gnostic America is a must read for those who sense a new “spiritual but not religious” religion has arisen in America, but who can’t put their finger on what exactly this religion is. Burfeind commits the sacrilege of defining a religion that claims to be “beyond” definition. More importantly, he poses the question, if the spiritual trends of contemporary culture are indeed a religion, what First Amendment safeguards remain for those who haven’t “evolved” with the emerging new consciousness, but choose to remain stuck in supposedly retrograde paradigms of thought?

Thy Strong Word - Ecclesiastes 4 "Evil Under the Sun"