The Great Divide: A Lutheran Evaluation of Reformed Theology 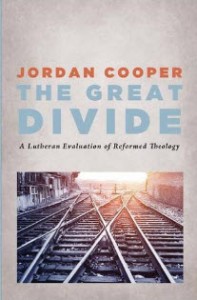 Since the sixteenth century, the Protestant tradition has been divided. The Reformed and Lutheran reformations, though both committed to the doctrine of the sinners justification by faith alone, split over Zwingli and Luther’s disagreement over the nature of the Lord’s Supper. Since that time, the Reformed and Lutheran traditions have developed their own theological convictions, and continue to disagree with one another. It is incumbent upon students of the reformation, in the Lutheran and Reformed traditions, to come to an understanding of what these differences are, and why they matter. In The Great Divide: A Lutheran Evaluation of Reformed Theology, Jordan Cooper examines these differences from a Lutheran perspective. While seeking to help both sides come to a more nuanced understanding of one another, and writing in an irenic tone, Cooper contends that these differences do still matter. Throughout the work, Cooper engages with Reformed writers, both contemporary and old, and demonstrates that the Lutheran tradition is more consistent with the teachings of Scripture than the Reformed.

Thy Strong Word - Isaiah 4 "The Branch of the Glorified"