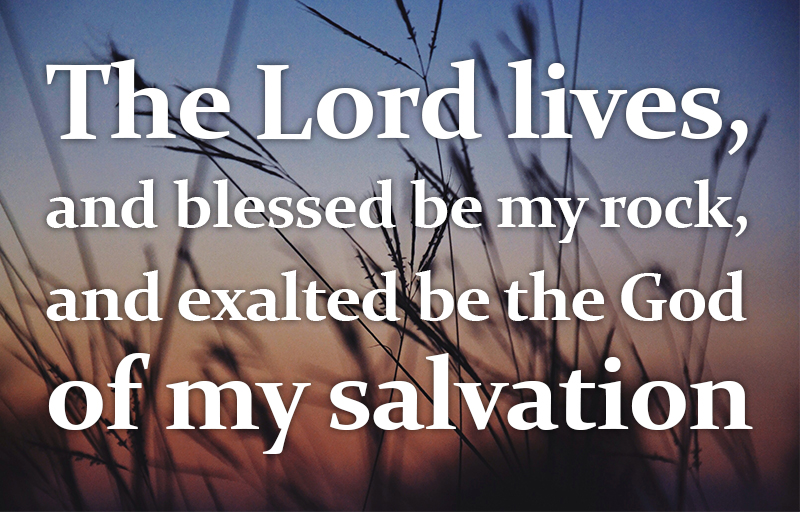 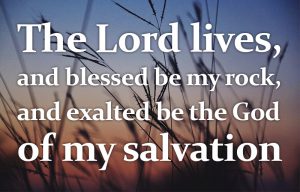 46 The Lord lives, and blessed be my rock,
and exalted be the God of my salvation—
47 the God who gave me vengeance
and subdued peoples under me,
48 who rescued me from my enemies;
yes, you exalted me above those who rose against me;
you delivered me from the man of violence.

49 For this I will praise you, O Lord, among the nations,
and sing to your name.
50 Great salvation he brings to his king,
and shows steadfast love to his anointed,
to David and his offspring forever.

The Way of Wisdom

9 Wisdom has built her house;
she has hewn her seven pillars.
2 She has slaughtered her beasts; she has mixed her wine;
she has also set her table.
3 She has sent out her young women to call
from the highest places in the town,
4 “Whoever is simple, let him turn in here!”
To him who lacks sense she says,
5 “Come, eat of my bread
and drink of the wine I have mixed.
6 Leave your simple ways,[a] and live,
and walk in the way of insight.”

A Vision of a Man with a Measuring Line

2 [a] And I lifted my eyes and saw, and behold, a man with a measuring line in his hand! 2 Then I said, “Where are you going?” And he said to me, “To measure Jerusalem, to see what is its width and what is its length.”3 And behold, the angel who talked with me came forward, and another angel came forward to meet him 4 and said to him, “Run, say to that young man, ‘Jerusalem shall be inhabited as villages without walls, because of the multitude of people and livestock in it. 5 And I will be to her a wall of fire all around, declares the Lord, and I will be the glory in her midst.’”

6 Up! Up! Flee from the land of the north, declares the Lord. For I have spread you abroad as the four winds of the heavens, declares the Lord.7 Up! Escape to Zion, you who dwell with the daughter of Babylon. 8 For thus said the Lord of hosts, after his glory sent me[b] to the nations who plundered you, for he who touches you touches the apple of his eye:9 “Behold, I will shake my hand over them, and they shall become plunder for those who served them. Then you will know that the Lord of hosts has sent me. 10 Sing and rejoice, O daughter of Zion, for behold, I come and I will dwell in your midst, declares the Lord. 11 And many nations shall join themselves to the Lord in that day, and shall be my people. And I will dwell in your midst, and you shall know that the Lord of hosts has sent me to you. 12 And the Lord will inherit Judah as his portion in the holy land, and will again choose Jerusalem.”

13 Be silent, all flesh, before the Lord, for he has roused himself from his holy dwelling.

A Vision of Joshua the High Priest

3 Then he showed me Joshua the high priest standing before the angel of the Lord, and Satan[c] standing at his right hand to accuse him. 2 And the Lord said to Satan, “The Lord rebuke you, O Satan! The Lord who has chosen Jerusalem rebuke you! Is not this a brand[d] plucked from the fire?” 3 Now Joshua was standing before the angel, clothed with filthy garments. 4 And the angel said to those who were standing before him, “Remove the filthy garments from him.” And to him he said, “Behold, I have taken your iniquity away from you, and I will clothe you with pure vestments.” 5 And I said, “Let them put a clean turban on his head.” So they put a clean turban on his head and clothed him with garments. And the angel of the Lord was standing by.

6 And the angel of the Lord solemnly assured Joshua, 7 “Thus says the Lord of hosts: If you will walk in my ways and keep my charge, then you shall rule my house and have charge of my courts, and I will give you the right of access among those who are standing here. 8 Hear now, O Joshua the high priest, you and your friends who sit before you, for they are men who are a sign: behold, I will bring my servant the Branch. 9 For behold, on the stone that I have set before Joshua, on a single stone with seven eyes,[e] I will engrave its inscription, declares the Lord of hosts, and I will remove the iniquity of this land in a single day. 10 In that day, declares the Lord of hosts, every one of you will invite his neighbor to come under his vine and under his fig tree.”

World Lutheran News Digest - The Temper of Our Nation's Capital