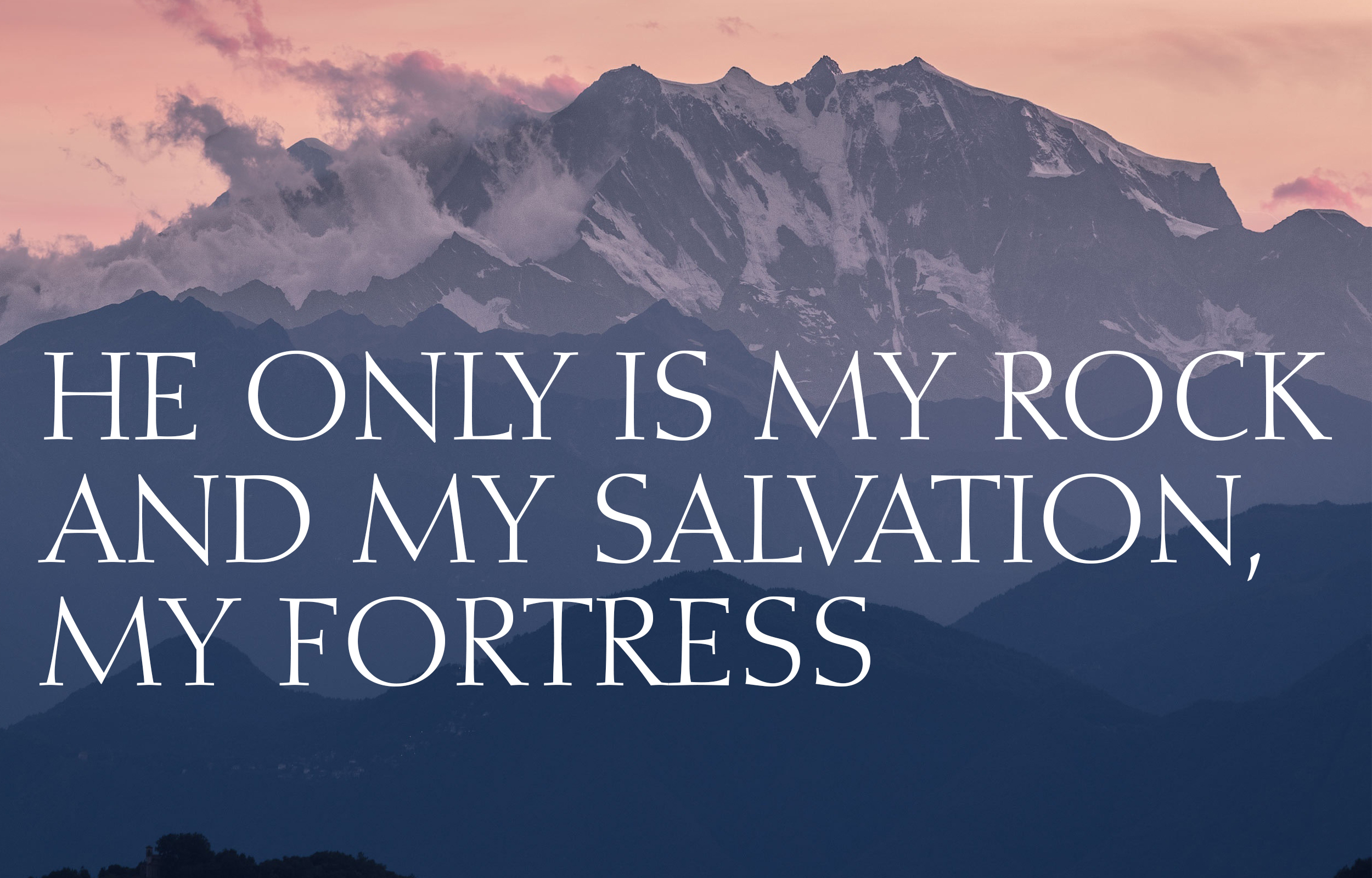 Home » Oratio: I Shall Not Be Shaken

My Soul Waits for God Alone

To the choirmaster: according to Jeduthun. A Psalm of David.

62 For God alone my soul waits in silence;
from him comes my salvation.
2 He alone is my rock and my salvation,
my fortress; I shall not be greatly shaken.

3 How long will all of you attack a man
to batter him,
like a leaning wall, a tottering fence?
4 They only plan to thrust him down from his high position.
They take pleasure in falsehood.
They bless with their mouths,
but inwardly they curse. Selah

5 For God alone, O my soul, wait in silence,
for my hope is from him.
6 He only is my rock and my salvation,
my fortress; I shall not be shaken.
7 On God rests my salvation and my glory;
my mighty rock, my refuge is God.

24 [a] When Saul returned from following the Philistines, he was told, “Behold, David is in the wilderness of Engedi.” 2 Then Saul took three thousand chosen men out of all Israel and went to seek David and his men in front of the Wildgoats’ Rocks. 3 And he came to the sheepfolds by the way, where there was a cave, and Saul went in to relieve himself.[b]Now David and his men were sitting in the innermost parts of the cave.4 And the men of David said to him, “Here is the day of which the Lordsaid to you, ‘Behold, I will give your enemy into your hand, and you shall do to him as it shall seem good to you.’” Then David arose and stealthily cut off a corner of Saul’s robe. 5 And afterward David’s heart struck him, because he had cut off a corner of Saul’s robe. 6 He said to his men, “The Lord forbid that I should do this thing to my lord, the Lord‘s anointed, to put out my hand against him, seeing he is the Lord‘s anointed.” 7 So David persuaded his men with these words and did not permit them to attack Saul. And Saul rose up and left the cave and went on his way.

8 Afterward David also arose and went out of the cave, and called after Saul, “My lord the king!” And when Saul looked behind him, David bowed with his face to the earth and paid homage. 9 And David said to Saul, “Why do you listen to the words of men who say, ‘Behold, David seeks your harm’? 10 Behold, this day your eyes have seen how the Lordgave you today into my hand in the cave. And some told me to kill you, but I spared you.[c] I said, ‘I will not put out my hand against my lord, for he is the Lord‘s anointed.’ 11 See, my father, see the corner of your robe in my hand. For by the fact that I cut off the corner of your robe and did not kill you, you may know and see that there is no wrong or treason in my hands. I have not sinned against you, though you hunt my life to take it. 12 May the Lord judge between me and you, may the Lord avenge me against you, but my hand shall not be against you. 13 As the proverb of the ancients says, ‘Out of the wicked comes wickedness.’ But my hand shall not be against you. 14 After whom has the king of Israel come out? After whom do you pursue? After a dead dog! After a flea! 15 May the Lord therefore be judge and give sentence between me and you, and see to it and plead my cause and deliver me from your hand.”