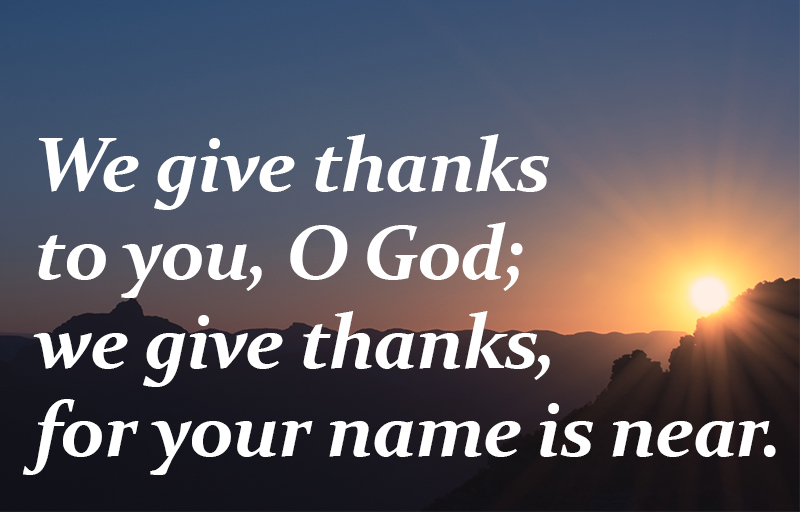 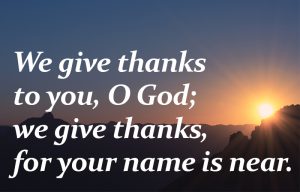 Rev. Jonathan Fisk gives a meditation on the Psalm of the Day, Psalm 75.

God Will Judge with Equity

To the choirmaster: according to Do Not Destroy. A Psalm of Asaph. A Song.

75 We give thanks to you, O God;
we give thanks, for your name is near.
We[a] recount your wondrous deeds.

6 For not from the east or from the west
and not from the wilderness comes lifting up,
7 but it is God who executes judgment,
putting down one and lifting up another.
8 For in the hand of the Lord there is a cup
with foaming wine, well mixed,
and he pours out from it,
and all the wicked of the earth
shall drain it down to the dregs.

2. Meditation on Wisdom in Ecclesiastes

5 [a] Guard your steps when you go to the house of God. To draw near to listen is better than to offer the sacrifice of fools, for they do not know that they are doing evil. 2 [b] Be not rash with your mouth, nor let your heart be hasty to utter a word before God, for God is in heaven and you are on earth. Therefore let your words be few. 3 For a dream comes with much business, and a fool’s voice with many words.

The Lord Will Give Salvation

12 The oracle of the word of the Lord concerning Israel: Thus declares the Lord, who stretched out the heavens and founded the earth and formed the spirit of man within him: 2 “Behold, I am about to make Jerusalem a cup of staggering to all the surrounding peoples. The siege of Jerusalem will also be against Judah. 3 On that day I will make Jerusalem a heavy stone for all the peoples. All who lift it will surely hurt themselves. And all the nations of the earth will gather against it. 4 On that day, declares the Lord, I will strike every horse with panic, and its rider with madness. But for the sake of the house of Judah I will keep my eyes open, when I strike every horse of the peoples with blindness. 5 Then the clans of Judah shall say to themselves, ‘The inhabitants of Jerusalem have strength through the Lord of hosts, their God.’

6 “On that day I will make the clans of Judah like a blazing pot in the midst of wood, like a flaming torch among sheaves. And they shall devour to the right and to the left all the surrounding peoples, while Jerusalem shall again be inhabited in its place, in Jerusalem.

7 “And the Lord will give salvation to the tents of Judah first, that the glory of the house of David and the glory of the inhabitants of Jerusalem may not surpass that of Judah. 8 On that day the Lord will protect the inhabitants of Jerusalem, so that the feeblest among them on that day shall be like David, and the house of David shall be like God, like the angel of the Lord, going before them. 9 And on that day I will seek to destroy all the nations that come against Jerusalem.

Him Whom They Have Pierced

13 “On that day there shall be a fountain opened for the house of David and the inhabitants of Jerusalem, to cleanse them from sin and uncleanness.

2 “And on that day, declares the Lord of hosts, I will cut off the names of the idols from the land, so that they shall be remembered no more. And also I will remove from the land the prophets and the spirit of uncleanness. 3 And if anyone again prophesies, his father and mother who bore him will say to him, ‘You shall not live, for you speak lies in the name of the Lord.’ And his father and mother who bore him shall pierce him through when he prophesies.

4 “On that day every prophet will be ashamed of his vision when he prophesies. He will not put on a hairy cloak in order to deceive, 5 but he will say, ‘I am no prophet, I am a worker of the soil, for a man sold me in my youth.’[b] 6 And if one asks him, ‘What are these wounds on your back?’[c] he will say, ‘The wounds I received in the house of my friends.’

7 “Awake, O sword, against my shepherd,
against the man who stands next to me,”
declares the Lord of hosts.

“Strike the shepherd, and the sheep will be scattered;
I will turn my hand against the little ones.
8 In the whole land, declares the Lord,
two thirds shall be cut off and perish,
and one third shall be left alive.
9 And I will put this third into the fire,
and refine them as one refines silver,
and test them as gold is tested.
They will call upon my name,
and I will answer them.
I will say, ‘They are my people’;
and they will say, ‘The Lord is my God.’”