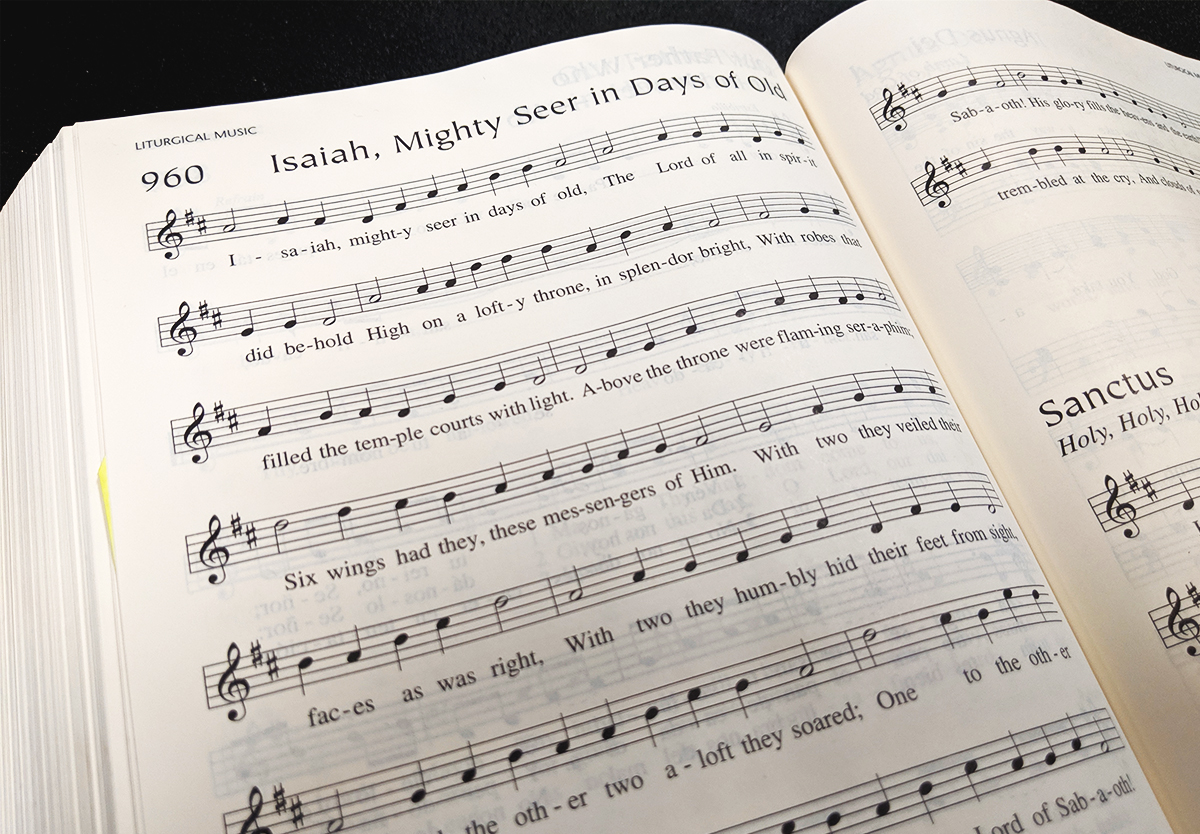 Home » Thy Strong Word – Isaiah 6: The Terror of Holiness, God for Us in Christ

Chapter 6 goes back to the beginning of Isaiah’s ministry, when he was first called to serve as a prophet. He has a glorious vision of God’s exalted robe, His flowing robe, and His fiery angel attendants serving in the Temple. The first five chapters of shown us though that God’s glory is to be feared: as the angels sing “Holy, holy, holy,” Isaiah nearly loses his life. God tells him to speak words of condemning law; repentance would only come after the Assyrian devastation.

When we sing “Holy, holy, holy” in church, the glory of God comes into our midst, hidden by the bread and wine of the Lord’s Supper. Like Isaiah, we should feel holy fear as we approach God’s presence. The bread taken from the altar purges the sin from our lips like a burning coal, commissioning us to speak for God, fearful prospect. How long? Come, Lord Jesus!

Isaiah’s Vision of the Lord

“Holy, holy, holy is the Lord of hosts;
the whole earth is full of his glory!”[b]

4 And the foundations of the thresholds shook at the voice of him who called, and the house was filled with smoke. 5 And I said: “Woe is me! For I am lost; for I am a man of unclean lips, and I dwell in the midst of a people of unclean lips; for my eyes have seen the King, the Lord of hosts!”

6 Then one of the seraphim flew to me, having in his hand a burning coal that he had taken with tongs from the altar. 7 And he touched my mouth and said: “Behold, this has touched your lips; your guilt is taken away, and your sin atoned for.”

Isaiah’s Commission from the Lord

“‘Keep on hearing,[c] but do not understand;
keep on seeing,[d] but do not perceive.’
10 Make the heart of this people dull,[e]
and their ears heavy,
and blind their eyes;
lest they see with their eyes,
and hear with their ears,
and understand with their hearts,
and turn and be healed.”
11 Then I said, “How long, O Lord?”
And he said:
“Until cities lie waste
without inhabitant,
and houses without people,
and the land is a desolate waste,
12 and the Lord removes people far away,
and the forsaken places are many in the midst of the land.
13 And though a tenth remain in it,
it will be burned[f] again,
like a terebinth or an oak,
whose stump remains
when it is felled.”
The holy seed[g] is its stump.

{The Lutheran Ladies' Lounge} Short: The Roll Down

Let’s Talk! The Rev. William Cwirla Is In: Lutheran Humor