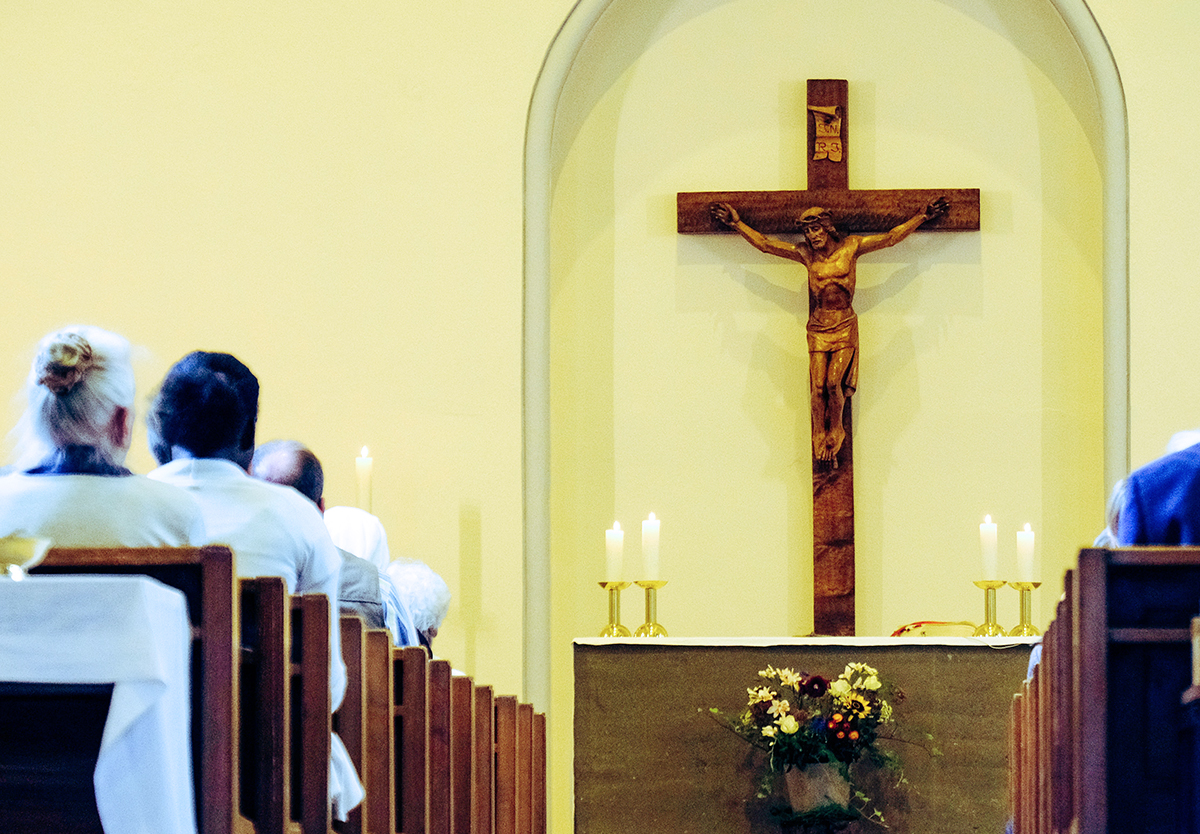 “As for me and my house, we will serve the LORD.” Joshua’s famous words from this final chapter speak not to Joshua’s bravery or resolve, but the faithfulness of Yahweh. The heads of Israel’s houses assemble at Shechem between Mt. Ebal and Mt. Gerazim, just as Moses instructed. From Abraham to Moses to Joshua, God has faithfully and miraculously blessed Israel.

When Israel “sees” God’s grace (23:4), they can do no other. When Joshua speaks on behalf of his house, he simply accepts the fear and service that God has put him into. “Choosing” for ourselves among the foreign gods leads only to disaster. The final event is Joshua’s death, pointing ahead to the resurrection of the greater Joshua who fulfills God’s promise of inheritance for us.

The Covenant Renewal at Shechem

24 Joshua gathered all the tribes of Israel to Shechem and summoned the elders, the heads, the judges, and the officers of Israel. And they presented themselves before God. 2 And Joshua said to all the people, “Thus says the Lord, the God of Israel, ‘Long ago, your fathers lived beyond the Euphrates,[a] Terah, the father of Abraham and of Nahor; and they served other gods. 3 Then I took your father Abraham from beyond the River[b] and led him through all the land of Canaan, and made his offspring many. I gave him Isaac. 4 And to Isaac I gave Jacob and Esau. And I gave Esau the hill country of Seir to possess, but Jacob and his children went down to Egypt. 5 And I sent Moses and Aaron, and I plagued Egypt with what I did in the midst of it, and afterward I brought you out.

6 “‘Then I brought your fathers out of Egypt, and you came to the sea. And the Egyptians pursued your fathers with chariots and horsemen to the Red Sea. 7 And when they cried to the Lord, he put darkness between you and the Egyptians and made the sea come upon them and cover them; and your eyes saw what I did in Egypt. And you lived in the wilderness a long time. 8 Then I brought you to the land of the Amorites, who lived on the other side of the Jordan. They fought with you, and I gave them into your hand, and you took possession of their land, and I destroyed them before you. 9 Then Balak the son of Zippor, king of Moab, arose and fought against Israel. And he sent and invited Balaam the son of Beor to curse you, 10 but I would not listen to Balaam. Indeed, he blessed you. So I delivered you out of his hand. 11 And you went over the Jordan and came to Jericho, and the leaders of Jericho fought against you, and also the Amorites, the Perizzites, the Canaanites, the Hittites, the Girgashites, the Hivites, and the Jebusites. And I gave them into your hand. 12 And I sent the hornet before you, which drove them out before you, the two kings of the Amorites; it was not by your sword or by your bow. 13 I gave you a land on which you had not labored and cities that you had not built, and you dwell in them. You eat the fruit of vineyards and olive orchards that you did not plant.’

Choose Whom You Will Serve

16 Then the people answered, “Far be it from us that we should forsake the Lord to serve other gods, 17 for it is the Lord our God who brought us and our fathers up from the land of Egypt, out of the house of slavery, and who did those great signs in our sight and preserved us in all the way that we went, and among all the peoples through whom we passed. 18 And the Lord drove out before us all the peoples, the Amorites who lived in the land. Therefore we also will serve the Lord, for he is our God.”

19 But Joshua said to the people, “You are not able to serve the Lord, for he is a holy God. He is a jealous God; he will not forgive your transgressions or your sins. 20 If you forsake the Lord and serve foreign gods, then he will turn and do you harm and consume you, after having done you good.” 21 And the people said to Joshua, “No, but we will serve the Lord.” 22 Then Joshua said to the people, “You are witnesses against yourselves that you have chosen the Lord, to serve him.” And they said, “We are witnesses.” 23 He said, “Then put away the foreign gods that are among you, and incline your heart to the Lord, the God of Israel.” 24 And the people said to Joshua, “The Lord our God we will serve, and his voice we will obey.” 25 So Joshua made a covenant with the people that day, and put in place statutes and rules for them at Shechem. 26 And Joshua wrote these words in the Book of the Law of God. And he took a large stone and set it up there under the terebinth that was by the sanctuary of the Lord. 27 And Joshua said to all the people, “Behold, this stone shall be a witness against us, for it has heard all the words of the Lord that he spoke to us. Therefore it shall be a witness against you, lest you deal falsely with your God.” 28 So Joshua sent the people away, every man to his inheritance.

29 After these things Joshua the son of Nun, the servant of the Lord, died, being 110 years old. 30 And they buried him in his own inheritance at Timnath-serah, which is in the hill country of Ephraim, north of the mountain of Gaash.

32 As for the bones of Joseph, which the people of Israel brought up from Egypt, they buried them at Shechem, in the piece of land that Jacob bought from the sons of Hamor the father of Shechem for a hundred pieces of money.[c] It became an inheritance of the descendants of Joseph.

33 And Eleazar the son of Aaron died, and they buried him at Gibeah, the town of Phinehas his son, which had been given him in the hill country of Ephraim.

The Student Union – Is the Bible Believable? (Rebroadcast)