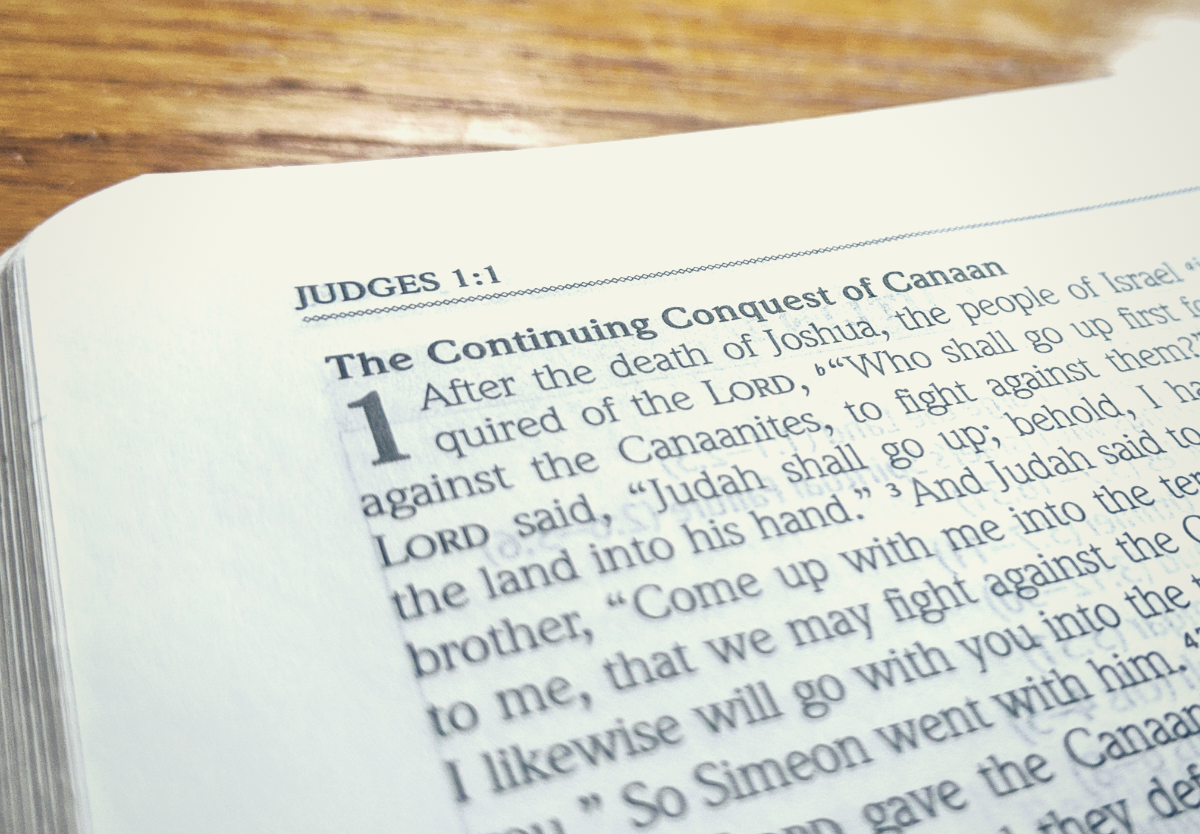 The book of Judges does not represent a high point in Israel’s history. Throughout the book, their faithlessness stands in contrast to the LORD’s faithfulness. Likely written during the early years of Israel’s United Kingdom, perhaps by the prophet Samuel, the book of Judges begins with some overlap from the book of Joshua. Tribe by tribe, Israel sets out to finish the conquest of the Promised Land, according to the LORD’s direction. He sends Judah first, the tribe from which the Promised Offspring will come. As Judah and its neighboring tribes keep their trust in the LORD, the book of Judges starts in a promising way as Israel begins to push out the inhabitants of Canaan. However, their turn to unfaithfulness begins quickly, as even Judah fails to drive out all of the idolaters in the land. Benjamin fails to drive out the Jebusites from Jerusalem. The house of Joseph copies the actions of Israel under Joshua in seeking a spy from the natives of Bethel, but the similarity is only superficial. Whereas Rahab of Jericho was incorporated into the people of Israel, the spy scouted by Joseph goes his own way to continue in idolatry. Such an example illustrates that the fall into apostasy is often gradual and sometimes bears the outward form of godliness. This is all the more reason for Christians to be on their guard against such temptation and to seek the LORD constantly.

The Continuing Conquest of Canaan

1 After the death of Joshua, the people of Israel inquired of the Lord, “Who shall go up first for us against the Canaanites, to fight against them?” 2 The Lord said, “Judah shall go up; behold, I have given the land into his hand.” 3 And Judah said to Simeon his brother, “Come up with me into the territory allotted to me, that we may fight against the Canaanites. And I likewise will go with you into the territory allotted to you.” So Simeon went with him. 4 Then Judah went up and the Lord gave the Canaanites and the Perizzites into their hand, and they defeated 10,000 of them at Bezek. 5 They found Adoni-bezek at Bezek and fought against him and defeated the Canaanites and the Perizzites. 6 Adoni-bezek fled, but they pursued him and caught him and cut off his thumbs and his big toes. 7 And Adoni-bezek said, “Seventy kings with their thumbs and their big toes cut off used to pick up scraps under my table. As I have done, so God has repaid me.” And they brought him to Jerusalem, and he died there.

8 And the men of Judah fought against Jerusalem and captured it and struck it with the edge of the sword and set the city on fire. 9 And afterward the men of Judah went down to fight against the Canaanites who lived in the hill country, in the Negeb, and in the lowland. 10 And Judah went against the Canaanites who lived in Hebron (now the name of Hebron was formerly Kiriath-arba), and they defeated Sheshai and Ahiman and Talmai.

11 From there they went against the inhabitants of Debir. The name of Debir was formerly Kiriath-sepher. 12 And Caleb said, “He who attacks Kiriath-sepher and captures it, I will give him Achsah my daughter for a wife.” 13 And Othniel the son of Kenaz, Caleb’s younger brother, captured it. And he gave him Achsah his daughter for a wife. 14 When she came to him, she urged him to ask her father for a field. And she dismounted from her donkey, and Caleb said to her, “What do you want?” 15 She said to him, “Give me a blessing. Since you have set me in the land of the Negeb, give me also springs of water.” And Caleb gave her the upper springs and the lower springs.

16 And the descendants of the Kenite, Moses’ father-in-law, went up with the people of Judah from the city of palms into the wilderness of Judah, which lies in the Negeb near Arad, and they went and settled with the people. 17 And Judah went with Simeon his brother, and they defeated the Canaanites who inhabited Zephath and devoted it to destruction. So the name of the city was called Hormah.[a] 18 Judah also captured Gaza with its territory, and Ashkelon with its territory, and Ekron with its territory. 19 And the Lord was with Judah, and he took possession of the hill country, but he could not drive out the inhabitants of the plain because they had chariots of iron. 20 And Hebron was given to Caleb, as Moses had said. And he drove out from it the three sons of Anak. 21 But the people of Benjamin did not drive out the Jebusites who lived in Jerusalem, so the Jebusites have lived with the people of Benjamin in Jerusalem to this day.

22 The house of Joseph also went up against Bethel, and the Lord was with them. 23 And the house of Joseph scouted out Bethel. (Now the name of the city was formerly Luz.) 24 And the spies saw a man coming out of the city, and they said to him, “Please show us the way into the city, and we will deal kindly with you.” 25 And he showed them the way into the city. And they struck the city with the edge of the sword, but they let the man and all his family go. 26 And the man went to the land of the Hittites and built a city and called its name Luz. That is its name to this day.