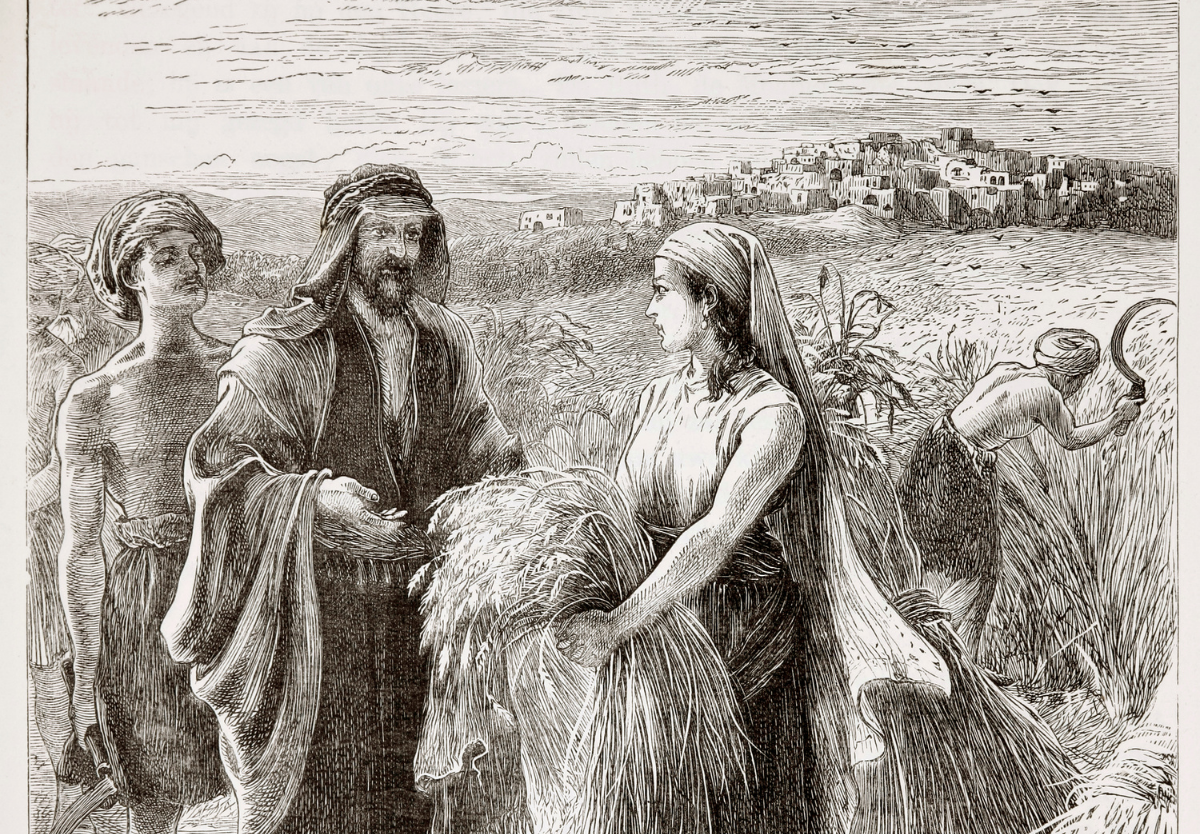 “But when he lies down, observe the place where he lies. Then go and uncover his feet and lie down, and he will tell you what to do.” What exactly is Naomi suggesting that her daughter-in-law do? Ruth maintains a respectful tone in everything she says, but she demonstrates a certain shrewdness and boldness—not to fulfill her personal desires—but for the sake of family. She prefigures the women who shrewdly and boldly visit Jesus Christ’s tomb early Sunday morning, only to find that God Himself has already “uncovered” the tomb. As limited humans we must respect our existing obligations, but Christ’s inheritance only grows larger as more are redeemed.

Ruth and Boaz at the Threshing Floor

3 Then Naomi her mother-in-law said to her, “My daughter, should I not seek rest for you, that it may be well with you? 2 Is not Boaz our relative, with whose young women you were? See, he is winnowing barley tonight at the threshing floor. 3 Wash therefore and anoint yourself, and put on your cloak and go down to the threshing floor, but do not make yourself known to the man until he has finished eating and drinking. 4 But when he lies down, observe the place where he lies. Then go and uncover his feet and lie down, and he will tell you what to do.” 5 And she replied, “All that you say I will do.”

6 So she went down to the threshing floor and did just as her mother-in-law had commanded her. 7 And when Boaz had eaten and drunk, and his heart was merry, he went to lie down at the end of the heap of grain. Then she came softly and uncovered his feet and lay down. 8 At midnight the man was startled and turned over, and behold, a woman lay at his feet! 9 He said, “Who are you?” And she answered, “I am Ruth, your servant. Spread your wings[a] over your servant, for you are a redeemer.” 10 And he said, “May you be blessed by the Lord, my daughter. You have made this last kindness greater than the first in that you have not gone after young men, whether poor or rich. 11 And now, my daughter, do not fear. I will do for you all that you ask, for all my fellow townsmen know that you are a worthy woman. 12 And now it is true that I am a redeemer. Yet there is a redeemer nearer than I. 13 Remain tonight, and in the morning, if he will redeem you, good; let him do it. But if he is not willing to redeem you, then, as the Lord lives, I will redeem you. Lie down until the morning.”

14 So she lay at his feet until the morning, but arose before one could recognize another. And he said, “Let it not be known that the woman came to the threshing floor.” 15 And he said, “Bring the garment you are wearing and hold it out.” So she held it, and he measured out six measures of barley and put it on her. Then she went into the city. 16 And when she came to her mother-in-law, she said, “How did you fare, my daughter?” Then she told her all that the man had done for her, 17 saying, “These six measures of barley he gave to me, for he said to me, ‘You must not go back empty-handed to your mother-in-law.’” 18 She replied, “Wait, my daughter, until you learn how the matter turns out, for the man will not rest but will settle the matter today.”

4 Now Boaz had gone up to the gate and sat down there. And behold, the redeemer, of whom Boaz had spoken, came by. So Boaz said, “Turn aside, friend; sit down here.” And he turned aside and sat down. 2 And he took ten men of the elders of the city and said, “Sit down here.” So they sat down. 3 Then he said to the redeemer, “Naomi, who has come back from the country of Moab, is selling the parcel of land that belonged to our relative Elimelech. 4 So I thought I would tell you of it and say, ‘Buy it in the presence of those sitting here and in the presence of the elders of my people.’ If you will redeem it, redeem it. But if you[b] will not, tell me, that I may know, for there is no one besides you to redeem it, and I come after you.” And he said, “I will redeem it.” 5 Then Boaz said, “The day you buy the field from the hand of Naomi, you also acquire Ruth[c] the Moabite, the widow of the dead, in order to perpetuate the name of the dead in his inheritance.” 6 Then the redeemer said, “I cannot redeem it for myself, lest I impair my own inheritance. Take my right of redemption yourself, for I cannot redeem it.”

A Moment for the Family: Holiday Traditions