Home » Studio A – A Salute to Veteran’s Day

‘Hap Arnold: The General Who Invented the U.S. Air Force‘ 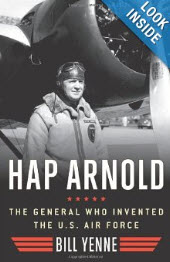 General Henry Harley “Hap” Arnold is widely considered the father of the United States Air Force. But his long list of accomplishments doesn’t begin or end there. He was also the first and only five-star general of the US Air Force; one of the first US military aviators; the first American to carry air mail; and the architect of the war-winning air strategy of World War II.In this new biography of one of the American military’s most towering figures, author Bill Yenne weaves the story of Hap Arnold’s life, from his youthful days as a cunning prankster to his sunset career as an elder statesman. All along, Yenne unfolds General Arnold’s life like the adventure story it is. A bold advocate for technological advancement, Hap Arnold was a powerful character in the golden age of aviation, an innovative warrior in the conflict that defined the modern era, and the creator of an entirely new branch of the US military.Hap Arnold: The General Who Invented the US Air Force is a page-turning adventure biography for history buffs, aviation enthusiasts, and anyone interested in the events that shaped America and the world in the first half of the twentieth century.

‘Gunny’s Rules How to Get Squared Away like a Marine‘

Put down your sissy drink with its umbrella, get off your backside, and square yourself away. Get fit, get a job, and get yourself some self-respect. America’s favorite, most in-your-face Sarge is going to show you how to get squared away like a Marine.

R. Lee “Gunny” Ermey, of The History Channel’s Mail Call, takes time out from telling viewers all about military technology, to tell readers all about life. Men today are facing a crisis of emasculation. Gunny is here to tell you how to fight back and save your dignity: by taking control of your own damn life. First, he teaches you how to get fit, stay fit, and defend yourself. Then, he teaches you how to conduct yourself the way real men do: with assertiveness but also with wisdom and courtesy. Finally, Gunny motivates you to use your new fitness and new attitude to live life like a man of honor: to work hard, reach for high goals, and set an example with your life.

Gunny’s Rules is the ultimate guide for anyone who wants to live life like one of the toughest of the tough—like a Marine.

with guest Dr. Uwe Siemon-Netto – Author, ‘Duc: A Reporter’s Love for the Wounded People of Vietnam‘

Read the article ‘The Wrong Side Won’

His Time - John the Steadfast, Christian Bioethics, the Crucifixion