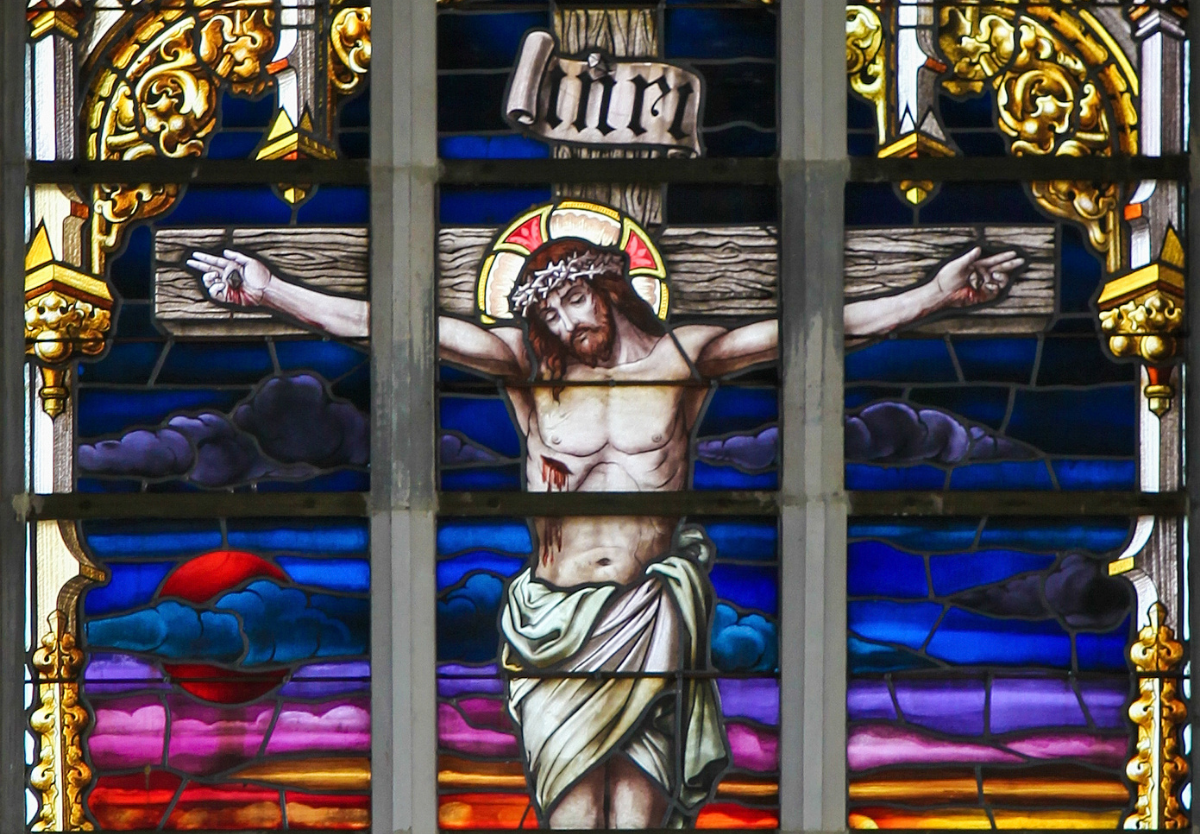 Home » Thy Strong Word — Matthew 27:24-44. Unbelievable mercy to unbelievable sinners: His blood be on us and on our children.

The people were about to riot unless Jesus, the innocent, sinless man was crucified. By God’s wisdom Pilate’s decision to have Jesus crucified is what brings us healing, life, and forgiveness. We feel the mockery, the thorns in the head, the moisture of spit on his face, and the nails piercing his skin. The words of the people and Roman soldiers are “true” (Blood will be on us, Hail King of the Jews, Son of God), but they are proclaimed not in saving faith. We see Jesus, the true King, serve His people in His kingdom by submission to God’s will in weakness for the sake of us (2 Corinthians 5:21). In grief we say, “Thanks be to God!” “Lord God, once again we look at the cross where Your Son died. Open our eyes to see this action by faith and humble us to receive Your promises with joy. In Christ, Amen”

24 So when Pilate saw that he was gaining nothing, but rather that a riot was beginning, he took water and washed his hands before the crowd, saying, “I am innocent of this man’s blood;[a] see to it yourselves.” 25 And all the people answered, “His blood be on us and on our children!” 26 Then he released for them Barabbas, and having scourged[b] Jesus, delivered him to be crucified.

27 Then the soldiers of the governor took Jesus into the governor’s headquarters,[c] and they gathered the whole battalion[d] before him. 28 And they stripped him and put a scarlet robe on him, 29 and twisting together a crown of thorns, they put it on his head and put a reed in his right hand. And kneeling before him, they mocked him, saying, “Hail, King of the Jews!” 30 And they spit on him and took the reed and struck him on the head. 31 And when they had mocked him, they stripped him of the robe and put his own clothes on him and led him away to crucify him.

32 As they went out, they found a man of Cyrene, Simon by name. They compelled this man to carry his cross. 33 And when they came to a place called Golgotha (which means Place of a Skull), 34 they offered him wine to drink, mixed with gall, but when he tasted it, he would not drink it. 35 And when they had crucified him, they divided his garments among them by casting lots. 36 Then they sat down and kept watch over him there. 37 And over his head they put the charge against him, which read, “This is Jesus, the King of the Jews.” 38 Then two robbers were crucified with him, one on the right and one on the left. 39 And those who passed by derided him, wagging their heads 40 and saying, “You who would destroy the temple and rebuild it in three days, save yourself! If you are the Son of God, come down from the cross.” 41 So also the chief priests, with the scribes and elders, mocked him, saying, 42 “He saved others; he cannot save himself. He is the King of Israel; let him come down now from the cross, and we will believe in him. 43 He trusts in God; let God deliver him now, if he desires him. For he said, ‘I am the Son of God.’” 44 And the robbers who were crucified with him also reviled him in the same way.

A Moment for the Family: Discussing Difficult Situations