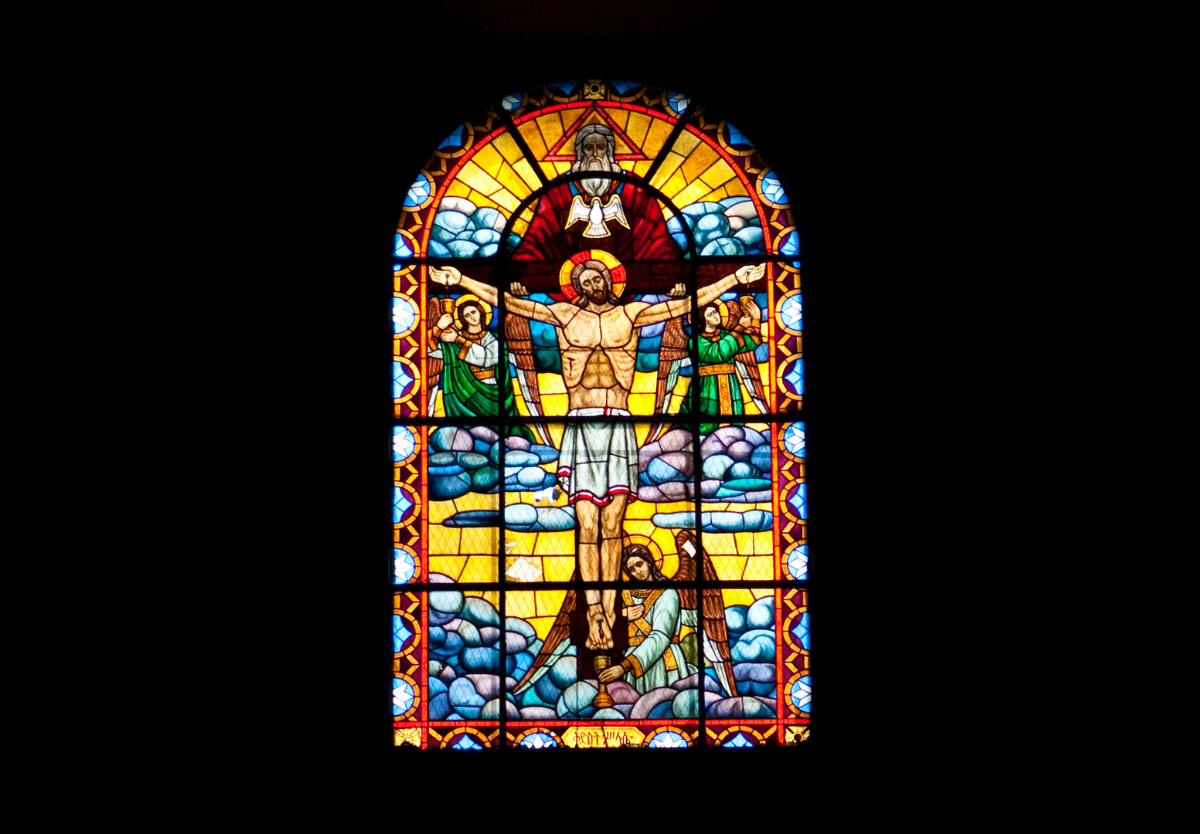 With Jesus weak from all the beatings He received, the Roman soldiers force Simon of Cyrene to carry Jesus’ cross to Golgotha. In this way, Simon provides a concrete picture of discipleship. As the crowd around Jesus grows, the faithful women begin to mourn and lament. Jesus instructs them not to lament both because the things He does are necessary and because mourning is actually necessary for the destruction that will come upon Jerusalem. When Jesus arrives at Golgotha, He is crucified between two criminals. Even in the midst of shame and mockery, Jesus speaks with forgiveness for the soldiers and promises Paradise to the repentant thief. He dies the blessed death of the faithful, commending Himself into His Father’s hands as He dies for our salvation.

26 And as they led him away, they seized one Simon of Cyrene, who was coming in from the country, and laid on him the cross, to carry it behind Jesus. 27 And there followed him a great multitude of the people and of women who were mourning and lamenting for him. 28 But turning to them Jesus said, “Daughters of Jerusalem, do not weep for me, but weep for yourselves and for your children. 29 For behold, the days are coming when they will say, ‘Blessed are the barren and the wombs that never bore and the breasts that never nursed!’ 30 Then they will begin to say to the mountains, ‘Fall on us,’ and to the hills, ‘Cover us.’ 31 For if they do these things when the wood is green, what will happen when it is dry?”

32 Two others, who were criminals, were led away to be put to death with him. 33 And when they came to the place that is called The Skull, there they crucified him, and the criminals, one on his right and one on his left. 34 And Jesus said, “Father, forgive them, for they know not what they do.”[a] And they cast lots to divide his garments. 35 And the people stood by, watching, but the rulers scoffed at him, saying, “He saved others; let him save himself, if he is the Christ of God, his Chosen One!” 36 The soldiers also mocked him, coming up and offering him sour wine 37 and saying, “If you are the King of the Jews, save yourself!” 38 There was also an inscription over him,[b] “This is the King of the Jews.”

39 One of the criminals who were hanged railed at him,[c] saying, “Are you not the Christ? Save yourself and us!” 40 But the other rebuked him, saying, “Do you not fear God, since you are under the same sentence of condemnation? 41 And we indeed justly, for we are receiving the due reward of our deeds; but this man has done nothing wrong.” 42 And he said, “Jesus, remember me when you come into your kingdom.” 43 And he said to him, “Truly, I say to you, today you will be with me in paradise.”

44 It was now about the sixth hour,[d] and there was darkness over the whole land until the ninth hour,[e] 45 while the sun’s light failed. And the curtain of the temple was torn in two. 46 Then Jesus, calling out with a loud voice, said, “Father, into your hands I commit my spirit!” And having said this he breathed his last. 47 Now when the centurion saw what had taken place, he praised God, saying, “Certainly this man was innocent!” 48 And all the crowds that had assembled for this spectacle, when they saw what had taken place, returned home beating their breasts. 49 And all his acquaintances and the women who had followed him from Galilee stood at a distance watching these things.