Home » Studio A – Being Human, Lincoln Assassination, After Tocqueville

‘Backstage at the Lincoln Assassination: The Untold Story of the Actors and Stagehands at Ford’s Theatre’ 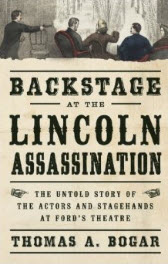 About the Book — April 14, 1865. A famous actor pulls a trigger in the presidential balcony, leaps to the stage and escapes, as the president lies fatally wounded. In the panic that follows, forty-six terrified people scatter in and around Ford’s Theater as soldiers take up stations by the doors and the audience surges into the streets chanting, “Burn the place down!”

This is the untold story of Lincoln’s assassination: the forty-six stage hands, actors, and theater workers on hand for the bewildering events in the theater that night, and what each of them witnessed in the chaos-streaked hours before John Wilkes Booth was discovered to be the culprit. In Backstage at the Lincoln Assassination, historian Thomas A. Bogar delves into previously unpublished sources to tell the story of Lincoln’s assassination from behind the curtain, and the tale is shocking. Police rounded up and arrested dozens of innocent people, wasting time that allowed the real culprit to get further away. Some closely connected to John Wilkes Booth were not even questioned, while innocent witnesses were relentlessly pursued. Booth was more connected with the production than you might have known—learn how he knew each member of the cast and crew, which was a hotbed of secessionist resentment. Backstage at the Lincoln Assassination also tells the story of what happened to each of these witnesses to history, after the investigation was over—how each one lived their lives after seeing one of America’s greatest presidents shot dead without warning.

Backstage at the Lincoln Assassination is an exquisitely detailed look at this famous event from an entirely new angle. It is must reading for anyone fascinated with the saga of Lincoln’s life and the Civil War era.

‘After Tocqueville: The Promise and Failure of Democracy’

with guest author Chilton Williamson Jr. – Senior Editor of Chronicles: A Magazine of American Culture, Contributor to Harper’s, the New Republic, the American Spectator, and the American Conservative. 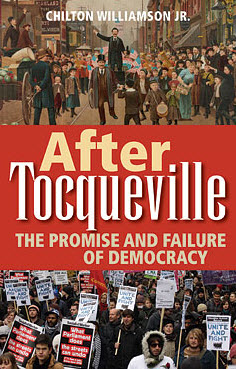 About the Book — The End of Democracy?

The fall of the Berlin Wall. The collapse of the Iron Curtain. The Orange Revolution. The Arab Spring.

The rush of events in recent decades seems to confirm that Alexis de Tocqueville was right: the future belongs to democracy. But take a closer look. The history of democracy since the 1830s, when Tocqueville wrote Democracy in America, reveals a far more complicated picture. And the future, author Chilton Williamson Jr. demonstrates, appears rather unpromising for democratic institutions around the world.

The fall of communism sparked the popular notion that the spread of democracy was inevitable. After Tocqueville challenges this sunny notion. Various aspects of twenty-first-century life that Tocqueville could scarcely have imagined—political, economic, social, religious, intellectual, technological, environmental—militate against democracy, both in developing societies and in the supposedly democratic West.

This piercing, elegantly written book raises crucial questions about the future of democracy, including:

Two decades ago, Francis Fukuyama famously pronounced the “end of history.” History, it turns out, is still very much with us. Democracy (whatever it is) may not be in the decades and centuries to come.

Wrestling With the Basics - Midrash: Tim Zechiel on the Thief on the Cross

His Time - John the Steadfast, Christian Bioethics, The New Jerusalem