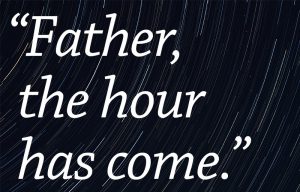 A Psalm for giving thanks.

100 Make a joyful noise to the Lord, all the earth!
2     Serve the Lord with gladness!
Come into his presence with singing!

3 Know that the Lord, he is God!
It is he who made us, and we are his;[a]
we are his people, and the sheep of his pasture.

4 Enter his gates with thanksgiving,
and his courts with praise!
Give thanks to him; bless his name!

5 For the Lord is good;
his steadfast love endures forever,
and his faithfulness to all generations.

I Will Walk with Integrity

101 I will sing of steadfast love and justice;
to you, O Lord, I will make music.

12 Then they returned to Jerusalem from the mount called Olivet, which is near Jerusalem, a Sabbath day’s journey away. 13 And when they had entered, they went up to the upper room, where they were staying, Peter and John and James and Andrew, Philip and Thomas, Bartholomew and Matthew, James the son of Alphaeus and Simon the Zealot and Judas the son of James. 14 All these with one accord were devoting themselves to prayer, together with the women and Mary the mother of Jesus, and his brothers.[a]

15 In those days Peter stood up among the brothers (the company of persons was in all about 120) and said, 16 “Brothers, the Scripture had to be fulfilled, which the Holy Spirit spoke beforehand by the mouth of David concerning Judas, who became a guide to those who arrested Jesus. 17 For he was numbered among us and was allotted his share in this ministry.” 18 (Now this man acquired a field with the reward of his wickedness, and falling headlong[b] he burst open in the middle and all his bowels gushed out. 19 And it became known to all the inhabitants of Jerusalem, so that the field was called in their own language Akeldama, that is, Field of Blood.) 20 “For it is written in the Book of Psalms,

God Shall Scatter His Enemies

To the choirmaster. A Psalm of David. A Song.

68 God shall arise, his enemies shall be scattered;
and those who hate him shall flee before him!
2 As smoke is driven away, so you shall drive them away;
as wax melts before fire,
so the wicked shall perish before God!
3 But the righteous shall be glad;
they shall exult before God;
they shall be jubilant with joy!

4 Sing to God, sing praises to his name;
lift up a song to him who rides through the deserts;
his name is the Lord;
exult before him!
5 Father of the fatherless and protector of widows
is God in his holy habitation.
6 God settles the solitary in a home;
he leads out the prisoners to prosperity,
but the rebellious dwell in a parched land.

7 O God, when you went out before your people,
when you marched through the wilderness, Selah
8 the earth quaked, the heavens poured down rain,
before God, the One of Sinai,
before God,[a] the God of Israel.
9 Rain in abundance, O God, you shed abroad;
you restored your inheritance as it languished;
10 your flock[b] found a dwelling in it;
in your goodness, O God, you provided for the needy.

Suffering as a Christian

12 Beloved, do not be surprised at the fiery trial when it comes upon you to test you, as though something strange were happening to you. 13 But rejoice insofar as you share Christ’s sufferings, that you may also rejoice and be glad when his glory is revealed. 14 If you are insulted for the name of Christ, you are blessed, because the Spirit of glory[a] and of God rests upon you. 15 But let none of you suffer as a murderer or a thief or an evildoer or as a meddler. 16 Yet if anyone suffers as a Christian, let him not be ashamed, but let him glorify God in that name. 17 For it is time for judgment to begin at the household of God; and if it begins with us, what will be the outcome for those who do not obey the gospel of God? 18 And

“If the righteous is scarcely saved,
what will become of the ungodly and the sinner?”[b]

19 Therefore let those who suffer according to God’s will entrust their souls to a faithful Creator while doing good.

6 Humble yourselves, therefore, under the mighty hand of God so that at the proper time he may exalt you, 7 casting all your anxieties on him, because he cares for you. 8 Be sober-minded; be watchful. Your adversary the devil prowls around like a roaring lion, seeking someone to devour. 9 Resist him, firm in your faith, knowing that the same kinds of suffering are being experienced by your brotherhood throughout the world. 10 And after you have suffered a little while, the God of all grace, who has called you to his eternal glory in Christ, will himself restore, confirm, strengthen, and establish you. 11 To him be the dominion forever and ever. Amen.

Romans 6:9  We know that Christ, being raised from the dead, will never die again; death no longer has dominion over him.

17 When Jesus had spoken these words, he lifted up his eyes to heaven, and said, “Father, the hour has come; glorify your Son that the Son may glorify you, 2 since you have given him authority over all flesh, to give eternal life to all whom you have given him. 3 And this is eternal life, that they know you, the only true God, and Jesus Christ whom you have sent. 4 I glorified you on earth, having accomplished the work that you gave me to do. 5 And now, Father, glorify me in your own presence with the glory that I had with you before the world existed.

6 “I have manifested your name to the people whom you gave me out of the world. Yours they were, and you gave them to me, and they have kept your word. 7 Now they know that everything that you have given me is from you. 8 For I have given them the words that you gave me, and they have received them and have come to know in truth that I came from you; and they have believed that you sent me. 9 I am praying for them. I am not praying for the world but for those whom you have given me, for they are yours. 10 All mine are yours, and yours are mine, and I am glorified in them. 11 And I am no longer in the world, but they are in the world, and I am coming to you. Holy Father, keep them in your name, which you have given me, that they may be one, even as we are one.

The Student Union – The Crusades and Just Wars