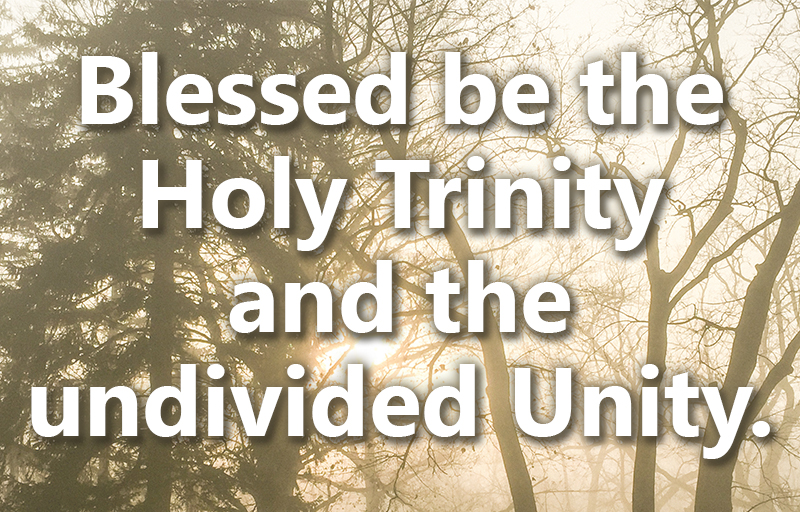 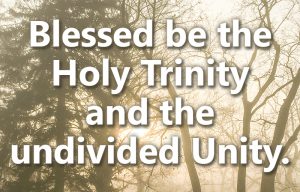 8 I have set the Lord always before me;
because he is at my right hand, I shall not be shaken.

9 Therefore my heart is glad, and my whole being[a] rejoices;
my flesh also dwells secure.
10 For you will not abandon my soul to Sheol,
or let your holy one see corruption.[b]

11 You make known to me the path of life;
in your presence there is fullness of joy;
at your right hand are pleasures forevermore.

Blessed be the Holy Trinity and the undivided Unity.
let us give glory to him because he has shown his mercy to us.

3 Great is the Lord, and greatly to be praised,
and his greatness is unsearchable.

5b On your wondrous works, I will meditate,
6b  and I will declare your greatness.

The Creation of the World

20 And God said, “Let the waters swarm with swarms of living creatures, and let birds[g] fly above the earth across the expanse of the heavens.”21 So God created the great sea creatures and every living creature that moves, with which the waters swarm, according to their kinds, and every winged bird according to its kind. And God saw that it was good.22 And God blessed them, saying, “Be fruitful and multiply and fill the waters in the seas, and let birds multiply on the earth.” 23 And there was evening and there was morning, the fifth day.

26 Then God said, “Let us make man[h] in our image, after our likeness. And let them have dominion over the fish of the sea and over the birds of the heavens and over the livestock and over all the earth and over every creeping thing that creeps on the earth.”

27 So God created man in his own image,
in the image of God he created him;
male and female he created them.

28 And God blessed them. And God said to them, “Be fruitful and multiply and fill the earth and subdue it, and have dominion over the fish of the sea and over the birds of the heavens and over every living thing that moves on the earth.” 29 And God said, “Behold, I have given you every plant yielding seed that is on the face of all the earth, and every tree with seed in its fruit. You shall have them for food. 30 And to every beast of the earth and to every bird of the heavens and to everything that creeps on the earth, everything that has the breath of life, I have given every green plant for food.” And it was so. 31 And God saw everything that he had made, and behold, it was very good. And there was evening and there was morning, the sixth day.

The Creation of Man and Woman

4 These are the generations
of the heavens and the earth when they were created,
in the day that the Lord God made the earth and the heavens.

How Majestic Is Your Name

To the choirmaster: according to The Gittith.[a] A Psalm of David.

8 O Lord, our Lord,
how majestic is your name in all the earth!
You have set your glory above the heavens.
2     Out of the mouth of babies and infants,
you have established strength because of your foes,
to still the enemy and the avenger.

3 When I look at your heavens, the work of your fingers,
the moon and the stars, which you have set in place,
4 what is man that you are mindful of him,
and the son of man that you care for him?

5 Yet you have made him a little lower than the heavenly beings[b]
and crowned him with glory and honor.
6 You have given him dominion over the works of your hands;
you have put all things under his feet,
7 all sheep and oxen,
and also the beasts of the field,
8 the birds of the heavens, and the fish of the sea,
whatever passes along the paths of the seas.

9 O Lord, our Lord,
how majestic is your name in all the earth!

14 But Peter, standing with the eleven, lifted up his voice and addressed them:

22 “Men of Israel, hear these words: Jesus of Nazareth, a man attested to you by God with mighty works and wonders and signs that God did through him in your midst, as you yourselves know— 23 this Jesus,[a]delivered up according to the definite plan and foreknowledge of God, you crucified and killed by the hands of lawless men. 24 God raised him up, loosing the pangs of death, because it was not possible for him to be held by it. 25 For David says concerning him,

“‘I saw the Lord always before me,
for he is at my right hand that I may not be shaken;
26 therefore my heart was glad, and my tongue rejoiced;
my flesh also will dwell in hope.
27 For you will not abandon my soul to Hades,
or let your Holy One see corruption.
28 You have made known to me the paths of life;
you will make me full of gladness with your presence.’

29 “Brothers, I may say to you with confidence about the patriarch David that he both died and was buried, and his tomb is with us to this day.30 Being therefore a prophet, and knowing that God had sworn with an oath to him that he would set one of his descendants on his throne, 31 he foresaw and spoke about the resurrection of the Christ, that he was not abandoned to Hades, nor did his flesh see corruption. 32 This Jesus God raised up, and of that we all are witnesses. 33 Being therefore exalted at the right hand of God, and having received from the Father the promise of the Holy Spirit, he has poured out this that you yourselves are seeing and hearing. 34 For David did not ascend into the heavens, but he himself says,

“Holy, holy, holy is the Lord of hosts;
the whole earth is full of his glory!”[a]

16 Now the eleven disciples went to Galilee, to the mountain to which Jesus had directed them. 17 And when they saw him they worshiped him, but some doubted. 18 And Jesus came and said to them, “All authority in heaven and on earth has been given to me. 19 Go therefore and make disciples of all nations, baptizing them in[a] the name of the Father and of the Son and of the Holy Spirit, 20 teaching them to observe all that I have commanded you. And behold, I am with you always, to the end of the age.”

Faith'n'Family - How to Deal With Shopping Addiction