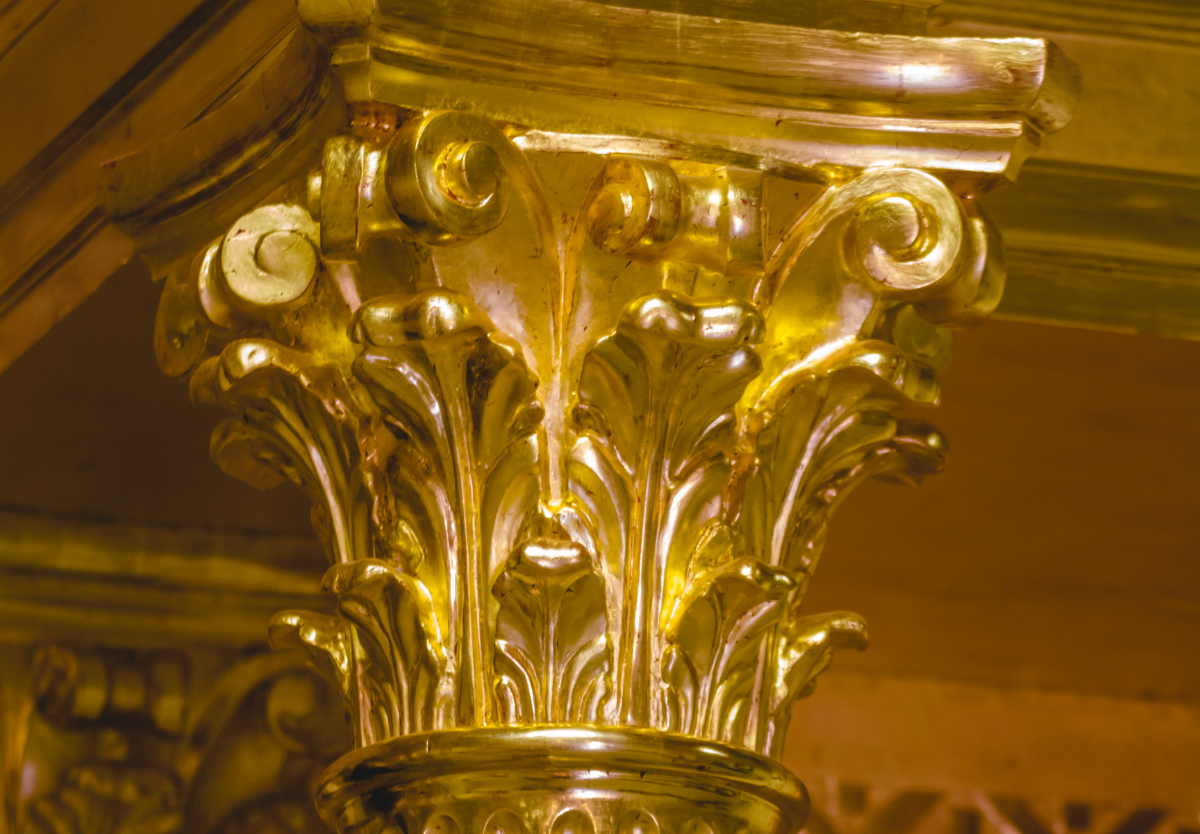 Bronze pillars, stands, sea of cast metal, oxen, cherubim, palm trees, and lions…oh my.  The LORD gave Solomon a very detailed list of furnishings to assure that everyone knew where to be made clean by the water and the bloody sacrifices.   In the Temple everything was covered by gold, showing the purity and sacredness of God’s presence.  We may not have churches made of gold, but we do have the presence of our LORD whose blood cleanses us from all sin.  Come into the presence of the LORD around the Word to receive a glimpse of what it was like in the Temple and what it will be like in heaven.

13 And King Solomon sent and brought Hiram from Tyre. 14 He was the son of a widow of the tribe of Naphtali, and his father was a man of Tyre, a worker in bronze. And he was full of wisdom, understanding, and skill for making any work in bronze. He came to King Solomon and did all his work.

23 Then he made the sea of cast metal. It was round, ten cubits from brim to brim, and five cubits high, and a line of thirty cubits measured its circumference. 24 Under its brim were gourds, for ten cubits, compassing the sea all around. The gourds were in two rows, cast with it when it was cast. 25 It stood on twelve oxen, three facing north, three facing west, three facing south, and three facing east. The sea was set on them, and all their rear parts were inward. 26 Its thickness was a handbreadth,[d] and its brim was made like the brim of a cup, like the flower of a lily. It held two thousand baths.[e]

27 He also made the ten stands of bronze. Each stand was four cubits long, four cubits wide, and three cubits high. 28 This was the construction of the stands: they had panels, and the panels were set in the frames, 29 and on the panels that were set in the frames were lions, oxen, and cherubim. On the frames, both above and below the lions and oxen, there were wreaths of beveled work. 30 Moreover, each stand had four bronze wheels and axles of bronze, and at the four corners were supports for a basin. The supports were cast with wreaths at the side of each. 31 Its opening was within a crown that projected upward one cubit. Its opening was round, as a pedestal is made, a cubit and a half deep. At its opening there were carvings, and its panels were square, not round. 32 And the four wheels were underneath the panels. The axles of the wheels were of one piece with the stands, and the height of a wheel was a cubit and a half. 33 The wheels were made like a chariot wheel; their axles, their rims, their spokes, and their hubs were all cast. 34 There were four supports at the four corners of each stand. The supports were of one piece with the stands. 35 And on the top of the stand there was a round band half a cubit high; and on the top of the stand its stays and its panels were of one piece with it. 36 And on the surfaces of its stays and on its panels, he carved cherubim, lions, and palm trees, according to the space of each, with wreaths all around. 37 After this manner he made the ten stands. All of them were cast alike, of the same measure and the same form.

45 Now the pots, the shovels, and the basins, all these vessels in the house of the Lord, which Hiram made for King Solomon, were of burnished bronze. 46 In the plain of the Jordan the king cast them, in the clay ground between Succoth and Zarethan. 47 And Solomon left all the vessels unweighed, because there were so many of them; the weight of the bronze was not ascertained.

48 So Solomon made all the vessels that were in the house of the Lord: the golden altar, the golden table for the bread of the Presence, 49 the lampstands of pure gold, five on the south side and five on the north, before the inner sanctuary; the flowers, the lamps, and the tongs, of gold; 50 the cups, snuffers, basins, dishes for incense, and fire pans, of pure gold; and the sockets of gold, for the doors of the innermost part of the house, the Most Holy Place, and for the doors of the nave of the temple.

A Moment in Scripture: 1 Chronicles 1-17