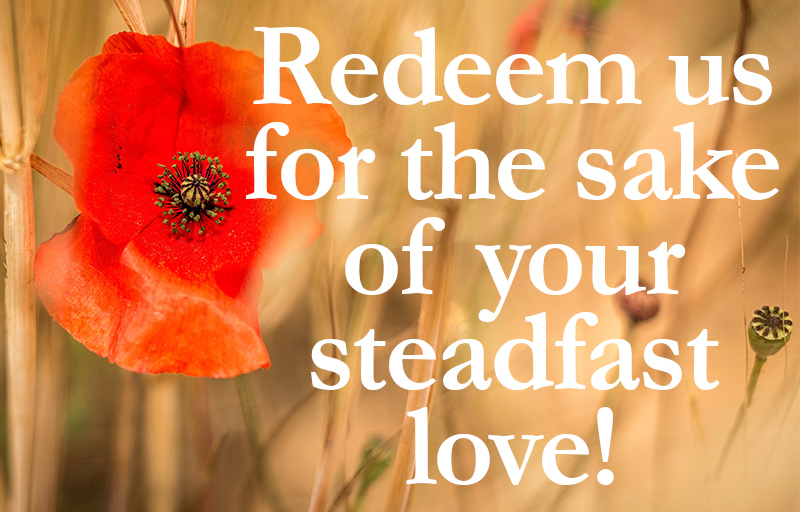 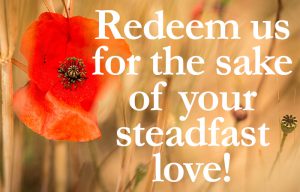 Come to Our Help

To the choirmaster. A Maskil[a] of the Sons of Korah.

44 O God, we have heard with our ears,
our fathers have told us,
what deeds you performed in their days,
in the days of old:
2 you with your own hand drove out the nations,
but them you planted;
you afflicted the peoples,
but them you set free;
3 for not by their own sword did they win the land,
nor did their own arm save them,
but your right hand and your arm,
and the light of your face,
for you delighted in them.

9 But you have rejected us and disgraced us
and have not gone out with our armies.
10 You have made us turn back from the foe,
and those who hate us have gotten spoil.
20 If we had forgotten the name of our God
or spread out our hands to a foreign god,
21 would not God discover this?
For he knows the secrets of the heart.
22 Yet for your sake we are killed all the day long;
we are regarded as sheep to be slaughtered.

23 Awake! Why are you sleeping, O Lord?
Rouse yourself! Do not reject us forever!
26 Rise up; come to our help!
Redeem us for the sake of your steadfast love!

The Blessings of Wisdom

8 Does not wisdom call?
Does not understanding raise her voice?
2 On the heights beside the way,
at the crossroads she takes her stand;
3 beside the gates in front of the town,
at the entrance of the portals she cries aloud:
4 “To you, O men, I call,
and my cry is to the children of man.
5 O simple ones, learn prudence;
O fools, learn sense.
6 Hear, for I will speak noble things,
and from my lips will come what is right,
7 for my mouth will utter truth;
wickedness is an abomination to my lips.
8 All the words of my mouth are righteous;
there is nothing twisted or crooked in them.
9 They are all straight to him who understands,
and right to those who find knowledge.
10 Take my instruction instead of silver,
and knowledge rather than choice gold,
11 for wisdom is better than jewels,
and all that you may desire cannot compare with her.

Vision of the New Temple

40 In the twenty-fifth year of our exile, at the beginning of the year, on the tenth day of the month, in the fourteenth year after the city was struck down, on that very day, the hand of the Lord was upon me, and he brought me to the city.[a] 2 In visions of God he brought me to the land of Israel, and set me down on a very high mountain, on which was a structure like a city to the south. 3 When he brought me there, behold, there was a man whose appearance was like bronze, with a linen cord and a measuring reed in his hand. And he was standing in the gateway. 4 And the man said to me, “Son of man, look with your eyes, and hear with your ears, and set your heart upon all that I shall show you, for you were brought here in order that I might show it to you. Declare all that you see to the house of Israel.”

The Glory of the Lord Fills the Temple

6 While the man was standing beside me, I heard one speaking to me out of the temple, 7 and he said to me, “Son of man, this is the place of my throne and the place of the soles of my feet, where I will dwell in the midst of the people of Israel forever. And the house of Israel shall no more defile my holy name, neither they, nor their kings, by their whoring and by the dead bodies[b] of their kings at their high places,[c] 8 by setting their threshold by my threshold and their doorposts beside my doorposts, with only a wall between me and them. They have defiled my holy name by their abominations that they have committed, so I have consumed them in my anger. 9 Now let them put away their whoring and the dead bodies of their kings far from me, and I will dwell in their midst forever.

10 “As for you, son of man, describe to the house of Israel the temple, that they may be ashamed of their iniquities; and they shall measure the plan.11 And if they are ashamed of all that they have done, make known to them the design of the temple, its arrangement, its exits and its entrances, that is, its whole design; and make known to them as well all its statutes and its whole design and all its laws, and write it down in their sight, so that they may observe all its laws and all its statutes and carry them out. 12 This is the law of the temple: the whole territory on the top of the mountain all around shall be most holy. Behold, this is the law of the temple.